Bro. Ralph Neumann, 84, died Nov. 6, 2019.  Bro. Ralph was a teacher, deeply dedicated to instilling the Marianist Charism in the hearts and minds of those he served. He was a brother of hope and joy. He served in Latin America for nearly three decades and then continued his mission in the United States tutoring English and Spanish.  Read his obituary. See more photos.

Freshmen bond with freshmen. Sophomores hang out with sophomores, juniors with juniors, seniors with seniors. That’s a typical high school.

A number of Marianist schools, however, offer a “house system” that breaks down the walls of class silos. The result? A more unified student body and increased family spirit – a defining characteristic of Marianist education.

Last fall, Archbishop Riordan High School implemented a house system for its 680 young men. Each student was assigned to one of four houses — Cana, Bolts, Russi and Pilar — with each house having a mix of students from grades 9 to 12.

During its inaugural year, Riordan introduced several competitive events in which houses earned points to capture the Chaminade Cup.

“The events encourage healthy competition,” said Valerie O’Riordan, head of Russi House and Riordan’s drama director. One recent event was called the RochambeauTournament. “It was ridiculously fun with 600-plus kids cheering each other on,” said Valerie. Watch a video from the event.

Bro. Justin Quiroz is in the “person-building” business, which is to say he teaches middle schoolers.

Bro. Justin, 27 and a Houston native, has been teaching technology and English at Mother Seton Academy in Baltimore for two years. It’s a role he treasures. “It’s the greatest feeling going to work every day. I serve as a religious presence in their lives, but I’m like a big brother, too.”

The students at Mother Seton come from families that are unable to afford a Catholic education without the school’s financial assistance. The Marianists cosponsor Mother Seton with five other religious orders.

“A lot of these kids don’t have any positive male role models,” Bro. Justin says, and he’s happy to step up to that challenge. He hopes to help students discover their potential. “The kids are in an important phase,” he says. “They’re beginning to shape their character. Essentially, we’re person-building, preparing them to make the right choices in tough situations and help them find what God wants them to be.”

Watch for more about Bro. Justin and his work at Mother Seton Academy in the spring issue of Alive magazine.

Inclusion is a hallmark of the Marianist charism. And at Chaminade Julienne Catholic High School, that means that young people with learning disabilities are very much a part of the school community.

This is an unusual approach for a Catholic school, most of which don’t have the resources to meet the needs of special education students.

Currently, 108 CJ students receive special support services. That’s one in every seven of the school’s 680 students. These students’ disabilities may involve Down syndrome or low IQ, or specific learning disabilities such as reading or speech disorders. Others have autism spectrum disorder, which includes Asperger’s syndrome or other challenges.

The special-needs students are mainstreamed into academics, extracurricular programs, retreats and all of the school functions, as much as possible, according to John Marshall, CJ’s principal. “The kids in this program fit seamlessly into the fabric of our school.

“These students have lot to teach us — about differences, about empathy, and what it means to be human,” says Marshall. “We are a stronger, more compassionate community because they are here.”

Watch for a more detailed story in the spring issue of Alive magazine.

Students with a wide range of learning abilities make up the CJ community. Here, Joe Siefert and Cecelia Meadows grab a quick study break in a school hallway.

Joseph Kurt Nugent will profess first vows as a Marianist brother on May 19 in Dayton.

Joseph, 29, was born in Nova Scotia. He met the Marianists through Frs. John Kracher and Luis Melo (Region of Canada) when he was a teenager. He completed the Marianist aspirancy program in San Antonio in 2014. He then entered the Oblate School of Theology, where he earned a master’s degree in theological studies. Joseph has a bachelor’s degree in philosophy with a minor in Catholic studies from the University of Manitoba. He entered the Marianist novitiate in 2016.

Brian Reavey, director of the Marianist Office of Justice, Peace & the Integrity of Creation, was recently quoted in an article in the National Catholic Reporter.

Brian described how he and his peers serving religious orders work for transformation and promote “armchair activism.” Read the article.

Women and men in Marianist formation gathered at the Emmanuel Retreat House for the March retreat.

The theme was Praying the Psalms. Bro. Ken Hoagland of the Province of Meribah was the presenter. 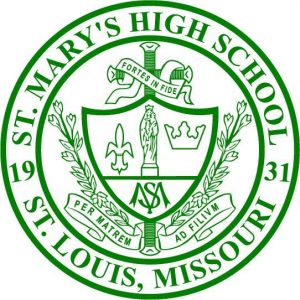 For the past 13 years, St. Mary’s High School in St. Louis has opened its doors as a host site to enable its low-income neighbors to get tax assistance. Every weekend from late January through early March, volunteers from the St. Mary’s community – administrators, teachers, alumni and students – welcome guests who come to receive free tax help.

“It’s rewarding to watch families walk out of here knowing they will get a tax refund,” says Kevin Hacker, St. Mary’s principal. “The average refund last year was $1,341. For these families, that amount can be a lifeline.”

“I know a lot of people in St. Louis struggle to make ends meet,” says Forest Shipp, a St. Mary’s senior who volunteers by welcoming visitors, offering coffee and helping with clean-up. “Participating in this feels good and I know it helps the community.”

University of Dayton senior Bradley Patrella got a shout-out from a local TV station for his work in promoting free trade practices and raising awareness of human trafficking.

Earlier this month, Bradley was featured on WGRT for his efforts, backed by UD human rights professor Tony Talbot.

“A fair trade campaign on campus is just a way to show official support and help educate people,” Bradley said. See the story.

Teachers retreat at Cape May

Several teachers from Marianist-sponsored schools attended a mid-February retreat at the Marianist Family Retreat Center. The retreat focused on self-care for busy teachers and featured prayer services and guided meditation.

The program was conceived in cooperation with Toni Mesina, Marianist LIFE coordinator and Fr. Dave McGuigan, the retreat center’s chaplain.

In the shadow of Fr. Chaminade, Fr. Don Wallace leads student actors through the living Stations of the Cross.

The school community gathered March 8 for its annual Via Cruces Viviente — the living Stations of the Cross. Fr. Don Wallace, CSJ chaplain, led the solemn ritual.

Bro. Gerald Hyland, 95, died on Feb. 11 with 65 years of religious profession. Bro. Gerry was a teacher and an artist. He entered the Society of Mary after serving and suffering severe injuries in World War II. Read his obituary. See more photos.

Fr. Francis Nakagawa, 90, died on Feb. 24. He had been a Marianist for nearly 70 years. Fr. Francis was a teacher and pastor who served the Church in Japan for many years. He was beloved by the members of the Japanese Catholic community in Hawaii. Read his obituary. See more photos.

♦  Obituaries of U.S. Province Marianist brothers and priests since 2007

In this month’s Marianist Moment, we meet Faustino Pérez-Manglano, the youngest of the Marianist “saints.” Faustino was a Spanish boy recognized for his deep love for the Virgin Mary.

Thanks to Bro. David Betz and Lay Marianist Mary Kay Fitzpatrick for creating this first article in a two-part series about Faustino Pérez-Manglano.

How seriously should we take the “seven deadly sins”? Do they still apply in the modern era?

In the first of a two-part Touchpoint article, Fr. Jim Heft says, “First of all, the seven deadly sins are neither deadly nor sins. They are not sins because they are tendencies. They are not deadly because when acted upon they can be forgiven.” Read more

Fr. Jim is president of the Institute for Advanced Catholic Studies at the University of Southern California.

Anyone interested in improving their understanding of the Blessed Virgin is welcome to join an online forum on April 6 presented by the International Marian Research Institute at the University of Dayton.

The forum — titled “Mary, Yesterday and Today” — will examine how Marian theology and spirituality have evolved since the middle of the last century.

The event includes presentations by Frs. Johann Roten and Thomas Thompson, as well as time for questions and discussion. Learn more.

Join the members of the Governor’s Island Marianist Community in Huntsville, Ohio, for a family retreat this summer. Choose from two dates: June 19-23 or July 17-21. It’s an affordable family getaway that builds faith and emphasizes fun! Learn more.

Tecaboca, a Marianist-sponsored summer camp and retreat center in Texas, seeks a full-time program director to manage summer camps and retreats. A strong candidate will be a visionary leader with strong attention to detail. Learn more.

Welcome to WordPress. This is your first post. Edit or delete it, then start writing!