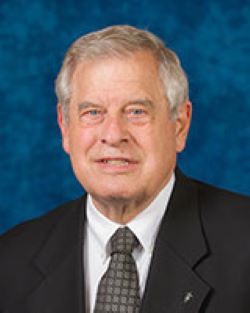 On April 1, 2022, University of Dayton awarded Bro. Raymond Fitz an honorary doctoral degree in humanities. Fitz is the longest-serving president in the university’s history, serving as UD president from 1979 to 2002.

Bro. Ray says, “I am very thankful to the university. I hope the occasion will strengthen the university’s commitment to be a catalyst and partner for solidarity in our greater Dayton community and across the world.”

The Marianists’ signature emphasis on community is pivotal in his service, which spans more than 50 years, focusing on poverty, racism and various social issues affecting children and families.

Bro. Ray says he is guided by Pope Francis. “He strongly emphasizes solidarity, a love and friendship that aims to transform society so that there is a greater quality of life and well-being for all, especially those most vulnerable in our society.”

He humbly credits a good leadership team for the success of his tenure and adds, “I was greatly assisted by Fr. Jim Heft and Bro. Bernie Ploeger.”

Since stepping down as UD president, he moved into a position as Father Ferree Professor of Social Justice – a professorship named for his mentor. “These days, I have been dedicating my teaching and community involvement to addressing what I call ‘the hidden violence of poverty.’ Poverty is ‘violent’ because the toxic stress has a strong negative impact on the cognitive and emotional development of children and parents.”

While he is honored to receive this recognition, he remains steadfast in his dedication to having his Marianist Family be a facilitator in creating solidarity worldwide. And he hopes that “as a community, we can witness a vitality and sense of mission that attracts young men who would like to join us.”

Click here to view photos from the award ceremony.

Click here for a full-length feature story from University of Dayton on the legacy of Bro. Ray.

The virtual event with the Holy Father, titled “Building Bridges,” allowed students to discuss immigration, climate change and other global topics with the pope. Chaminade junior Alycia Tausaga, majoring in Environmental Science, and senior Joseph Durocher, a Biochemistry major, were part of 15 students from Catholic universities in the West and Pacific Regions to be selected for the event. The other students were from the following universities: Loyola Marymount University, Santa Clara University, University of San Francisco, Gonzaga University, Seattle University and University of California.

A total of 100 students from across three regions participated in the Zoom discussion. Chaminade’s Rector and VP for Mission Bro. Edward Brink was able to secure two spots for Chaminade representatives. Loyola University in Chicago hosted the event in collaboration with the Argentinian theologian, Emilce Cuda, the head of the Pontifical Commission for Latin America.

You can hear more from Alycia and Joseph regarding what it meant to be involved by visiting this link from Chaminade University.

Several news organizations also reported on the event; click on the media outlet buttons below to listen to coverage and read more.

Solidarity in Support of Ukraine

From the coast of California to the meadows of the Midwest stretching beyond the banks of New York, Marianist Communities are gathering in prayer and support for Ukraine.

Archbishop Riordan High School in San Francisco is holding an international drive with a competitive flair to raise funds for the war-torn country and its refugees.

At Chaminade College Preparatory in St. Louis, students and staff asked God to “turn it around” in a Lenten prayer service.

In solidarity with many displaced Ukrainians and in response to the call of the U.S. Conference of Catholic Bishops, the Marianist Province of the United States donated $25,000 to Caritas Internationalis as a designated gift to assist with the needs of refugees. The Marianist Provincial Council also asked Fr. Robert Bouffier to write a prayer for Russia and Ukraine. Click here to download and print it.

The Conference of Major Superiors of Men (CMSM) also encourages donations and prayers, stating, “We stand in solidarity with our brothers in religious life in Ukraine and those here in the U.S. connected to the region. Their ministry is important now, more than ever.”

Join us in praying for the intercession of the Blessed Virgin Mary. Ukrainians have a history of seeking Mary’s protection during difficult times. Kayla Harris, an archivist and associate professor at University of Dayton, says you can find examples of it in the images of the Pokrova displayed by anti-war demonstrators.

If you’d like to learn more, visit The Marian Library’s Ukrainian Marian Collection, containing exhibits of the country’s religious and cultural heritage.

Like his father, Larry Bommarito, a ’71 alum of St. John Vianney High School, Billy Bommarito graduated in 2008 from this same Marianist school and began working as a youth minister.

Six years later, he felt a call to high school ministry. “The Marianist roots run deep in the Bommarito family,” said Billy, leading him to accept the position as a campus minister at St. Mary’s High School in St. Louis in 2019.

Although significant events, such as class retreats, enable Billy to reach a large group of students at one time, “connecting with students one-on-one or in small groups is where real conversations about faith begin and personal relationships grow,” he said.

That’s made all the easier because of the Marianist Charism’s emphasis on fostering faith through community.

“Living out ‘Marianist hospitality’ through regular socials held on and off-campus or bringing students together through Marianist LIFE helps us create community and genuinely get to know others,” said Billy.

Serving at St. Mary’s has had a big impact on Billy’s own life and ministry. “The community, brotherhood and support for students and faculty alike are unmatched,” he said. “Our devotion to the Marianist Charism is visible and alive in the halls of this school.” 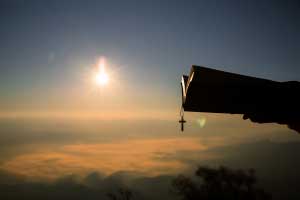 Lent: A Time of Conversion and What Our Marianists Saints Can Contribute

Welcome to the season of Lent. It is a time when we are called to look at our lives and enter into a process of conversion. And conversion can be a daunting endeavor, especially when we feel that we are not up to the task of engaging in the process. But it is important to recognize that we may need assistance for this process of conversion. Finding mentors or spiritual guides can be the support in trying to figure out what God is calling us to uphold in our conversion. We in the Marianist Family are blessed to have holy men and women who can be those mentors or guides, especially our Marianist Saints.

“The Marianist Way of the Cross”

The Lenten season provides an extraordinary time to focus on the life, death and resurrection of Jesus Christ. The Stations of the Cross act as a traditional 14-step Catholic devotion to this passionate journey of Jesus.

As you navigate your path of fasting and repentance leading up to Easter, you might enjoy a publication pulled from the Marianist archives. The 32-page booklet titled “The Marianist Way of the Cross” was written and illustrated in 1954 by the late Louis A. Weber (1919-2018). Louis is a former Marianist Brother who taught in the art department at University of Dayton. He also crafted the original tabernacle with colored enamel plates in the Roncalli Assembly Chapel at Bergamo Center in Dayton, Ohio.

Bro. Francis Spaeth, 98, died on March 16, 2022. Bro. Frank was an accomplished teacher, administrator and coach whose career in education spanned more than 50 years and religious profession 78 years. He was also a World War II veteran. Upon moving to Cupertino, he became an avid rosary-maker, hand-fashioning more than 1,000 rosaries in the course of a decade.

Fr. Robert Hackel, 89, died on March 20, 2022, with 70 years of religious profession. Father Bob (as he was best known) was a beloved teacher, chaplain, community director, missionary and associate pastor. Beyond faithfully exercising his priestly duties in a variety of assignments, Father Bob is remembered for his interest in politics and his fascination with “feathered fowl.” 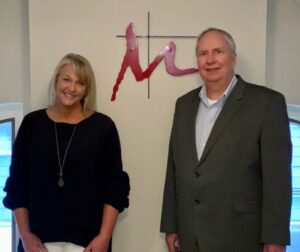 Both hail from St. Louis where each built an impressive array of communications and technical skills while serving a variety of St. Louis organizations.

Theresa’s experience covers the gamut — from telling compelling stories and breaking news as a TV reporter/anchor to managing PR and marketing for legal and political clients to creating motivating copy and communications plans for Fortune 500 companies.

“FamilyOnline provides me the opportunity to do what I love most — share inspirational stories that have an impact,” she said. “Working with the Marianists gives me a sense of profound purpose while strengthening my Catholic faith and devotion to Mary.”

John spent much of his career at The Boeing Company, starting as a technical illustrator before moving into software programming and engineering.

Now he’s ready for a new chapter in his life. “My faith has always been important,” said John. “This position is a perfect fit and allows me to use my lifelong Catholic faith, communications experience and engineering skills.”

Chaminade College Preparatory School, an independent, Catholic school in St. Louis, is dedicated to developing the inherent spiritual, intellectual, emotional and physical potential of young men in middle and high school. We hire dedicated teachers who are passionate about student learning and working in a collaborative environment.

We are currently accepting applications for a Director of Campus Ministry.

This is a full-time faculty position in the Classical and Modern Languages Department that reports to the department chair and the principal. 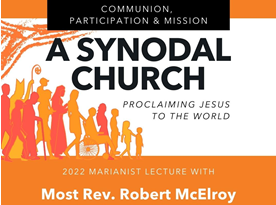 Dioceses and Archdioceses across the U.S. and worldwide are sponsoring conversations on synodality. Chaminade University’s Marianist Lecture featured Bishop Robert McElroy on synodality. The title of his presentation was “A Synodal Church: Proclaiming Jesus to the World.” The presentation was very well received. You can click here to listen. 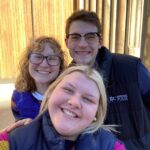 Do you know a young adult interested in a year of service, solidarity and intentional community living, complemented with spiritual and professional development as a servant leader through the Marianist Charism? If so, please encourage them to visit the PULSE website and request an application for the 2022-2023 program year.

PULSE aligns participants with professional nonprofit roles in Dayton, Ohio, and provides room and board, groceries, healthcare, transportation to Dayton and an end-of-year $5,000 pre-tax allocation. Information about the upcoming non-profit placements is available online.

Applications are due by April 10, 2022 – late applications are welcome on a rolling basis following that date. Contact Maureen O’Rourke with any questions.

The Spring 2022 Edition of ALIVE is Here!

Check out the latest issue of ALIVE magazine that highlights how Fr. James Heft uses open-dialogue and conversation to connect with students at University of Southern California. You’ll also find an in-depth look at a new level of teaching at the Marianist Novitiate.

To receive your free subscription to the print edition of ALIVE, please send your name and mailing address to [email protected].