Taking the PULSE of Healthcare 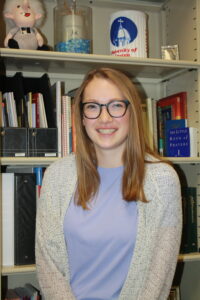 Growing up in Dayton, Ohio, Abby Shahady thought she knew the city well. “But serving as a Marianist PULSE volunteer this year has opened my eyes,” she said. “I feel like I have not truly lived in Dayton until now.”

Abby, a 2022 University of Dayton graduate with a major in health sciences, is one of three volunteers participating in PULSE for 2022-2023. PULSE is a post-graduate, servant leadership and social justice initiative sponsored by the Marianists. Each PULSE volunteer makes a one- or two-year commitment to live with fellow volunteers in a lower-income neighborhood while working full-time at local nonprofit agencies.

With Abby’s healthcare background, she was a natural fit for serving two nonprofit sites: The Fitz Center for Leadership in Community and Dayton Children’s Hospital Family Resource Connection.

What does she do? “The short answer is that I work in health equity,” she said. Working in this arena means focusing on systemic health and social inequities that put many at greater risk of sickness and death.

Abby is currently designing a health equity fellows program which the Fitz Center intends to launch soon. It will equip students to address health equity issues in their communities. Her work at Dayton Children’s as a family advocate “helps me better understand health equity issues and individual family’s social needs,” said Abby.” “As an advocate, I help them find existing resourses to meet those needs.”

One of the more valuable aspects of the PULSE program is that it provides mentoring and formation for each volunteer. “I meet regularly with Bro. Ray Fitz, who challenges me to think and connect my personal spirituality with the tangible mission at my nonprofit sites,” said Abby. “These conversations are a crucial aspect of PULSE, helping to tie Marianist virtues to the mission of social justice.”

Abby’s next step in her career path is medical school, “which I hope to begin this fall,” she said. “But Bro. Ray is making it very hard for me to want to leave Dayton anytime soon!”

The university broke ground on the three-story, 30,000-square-foot  Blank Sheppard Innovation Center in October 2022. It will support advanced manufacturing research and instruction. It will also promote outreach with industry and community partners engaged in engineering, computing, and related scientific disciplines. The third floor will become home to a planned Bachelor of Science in Nursing program. Click here to read more.

The university’s Greehey School of Business is also set to be renovated to encompass redesigning learning spaces, upgrading the student-centric atrium, and acquiring new and emerging technology. The Albert and Margaret Alkek Foundation awarded St. Mary’s University a five-year grant of $1 million to enable the improvements. Click here to read more. 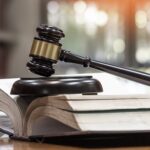 “We are extremely excited to have such prominent organizations joining the Flyer Legal Pathways program,” said Andrew Strauss, UD School of Law dean. Click here to read the full story.

Founder’s Day and Marianist Heritage Week Celebrations Across the Province

Click here to see how Chaminade University of Honolulu celebrated.

Click here to read about how Chaminade-Madonna College Prep in Hollywood, Florida, celebrated.

Some Lay Marianists in New Jersey honored the Feast day of Blessed Chaminade by renewing their vows at Cape May Marianist Retreat Center. Click here to see a photo.

Marianist Family members in St. Louis paid homage to Blessed Chaminade at Our Lady of the Pillar with a presentation from Bro. Jack Ventura. Click here to watch a video introduction and see photos. 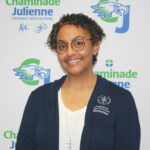 These platforms help make her relatable to a younger audience. She gets frustrated at Hollywood portraying nuns as either harsh or naive and welcomes everyone to get a glimpse of her culture, personality, and spirituality.

While Trahan attended Catholic schools and Sunday Mass growing up, she hadn’t heard of the Marianists until after college. The eager student studied biomedical sciences at Texas A&M University and then earned master’s degrees in Catholic Leadership and Pastoral Ministry from St. Mary’s University to expand her educational background.

When Trahan began teaching religion at Central Catholic High School in San Antonio, she felt deeply connected to the charism and became a Lay Marianist. She started a blog chronicling her journey to her first vows at age 33, and at age 38, she took final vows as a Marianist Sister.

“A lot has changed,” exclaimed Trahan, now with 22 years as a Marianist educator, 15 of which she has served as a Marianist Sister. “I never dreamt I would travel so much or develop relationships with such amazing people. I have collaborated with people who help me see things in new ways, including students I have mentored. They have helped me just as much as I have helped them – maybe more.”

Sr. Nicole currently serves as a campus minister and Mission Integration Team member at Chaminade Julienne Catholic High School in Dayton, Ohio, is the national vocations director for the Marianist Sisters, and can be found guest speaking at several events and on videos and podcasts.

“It’s a very complicated time to be a teenager. The way students socialize today, what they do with their time, what they expect from the adults in their lives, how they pray, what they consider as fun – it’s all different,” said Trahan. She encourages everyone to step out of their comfort zones and embrace new ways to share their faith. 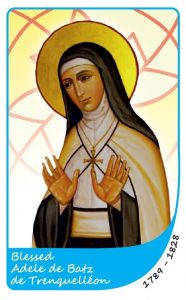 At just 11 years old, Blessed Adèle knew she wanted to devote her life to God. Born into a wealthy aristocratic family, she turned down an offer of marriage and spent her life in service to the poor and building a community of women of faith that would later become the Daughters of Mary Immaculate. In her short life, she combined her orientation toward love and prayer with service and action. Her life offers women of all ages an example of how to live with hope, dedication, love, and courage.

Click here to learn 10 interesting facts about one of our treasured Marianist Causes.

In November 2021, the Marianist Archives received an email from Susanna Steisel, a photo researcher at Ken Burns’ Florentine Films in New Hampshire. She was hoping to obtain permission to use a photograph of Hawaii believed to be taken by Marianist photographer extraordinaire Bro. Gabriel Bertram Bellinghausen (1849-1933).  Unfortunately, the origin could not be confirmed, as no glass negative was found in the Marianist Archives.

Reference and Research Archivist Lisa Finnie emailed her scans of five other photographs from our collection that met the criteria, in particular, to be of nature and dated c1890.

The photograph is located on page 69 of the book, entitled Our America, and a three-paragraph discussion of the photograph (pp. 277-278) is included in the Illustration Notes. It mentions that eight Marianist Brothers arrived in Hawaii in September 1883; among them, Bro. Gabriel Bertram Bellinghausen, SM, who was devoted to his faith, his students, and photography. “His photographs show the islands before the onslaught of business and progress descended on the native culture.”

Bro. Alva Gillis, 92, died on December 31, 2022, with 37 years of religious profession. He was a pastoral minister, a maintenance worker, and a valued volunteer. His varied life experiences enabled him to connect easily with people. Brother Al had an unusual path to the Marianist brotherhood. He entered the novitiate at age 53, following a 25-year marriage that blessed him with six children but ended in a painful divorce. Despite this atypical route, Brother Al is remembered as a committed and generous Marianist.

Bro. Michael John Galvin, 81, died on January 1, 2023, with 63 years of religious profession. He was a beloved teacher, linguist, counselor, administrator, and tireless advocate for the immigrant communities he served. He drew energy and strength from his experience of Marianist community life, crediting it as “the key for my happiness” and counting it as “the greatest blessing among many” he’d experienced in his life.

Fr. Donald James Wallace, 86, died on January 25, 2023, in San Antonio, TX, with 67 years of religious profession.  His obituary will appear in the next issue of FamilyOnline.

Fr. Anthony Gerard Jansen, 98, died on January 27, 2023, in San Antonio, TX, with 79 years of religious profession.  His obituary will appear in the next issue of FamilyOnline.

Chaminade College Preparatory in Los Angeles County, CA, is celebrating its platinum anniversary. This Catholic school in the Marianist Tradition had humble beginnings, given just $9,000 and a few months to find a suitable facility for a boys’ high school in 1952. In 1961, the Marianists relocated Chaminade to West Hills and, in 1969, expanded its educational program to include a middle school on their Chatsworth campus. Today, the co-ed school boasts two campuses in the San Fernando Valley and continues to grow.

Bro. Jack Dempsey compiled a detailed timeline of its history and its vision for the future. 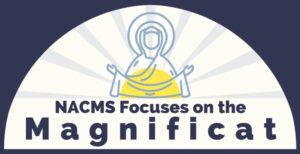 The North American Center for Marianist Studies (NACMS) has begun a new program that focuses on the importance of the Magnificat in the life and prayer of Marianists. The first one, held January 28, featured Sr. Franca Zonta as the speaker. The program included a presentation and time for Q&A.

Registration forms for the remaining four programs, scheduled monthly through May, will be available soon. Don’t miss out; click here to subscribe to the NACMS newsletter!

Reflect on the Virgin Mary and Healing During a Two-Part Marian Forum.

Part 2: Feb. 28 at 2:30 p.m. (CST) via Zoom – Artist Mickey McGrath engages in an interview-style discussion on the role of art in the healing of communities.

District Update #66 from the Marianist District of India

We welcome and encourage submissions of interest to our nearly 3,600 subscribers. Please send them to Theresa Petry.

NOTICE: The original content and materials available through this website (Marianist.com) and other websites or publications (such as FamilyOnline and ALIVE Magazine) are owned or provided by the Marianist Province of the United States (Marianist Province, and are protected by copyright, trademark and other intellectual property laws. You may view, copy and print pages from our website(s) or other publications only (1) for personal use, provided that you maintain all copyright, trademark, and other proprietary rights or notices, (2) as a personal resource, or (3) for communicating with the Marianist Province. You may not otherwise use, reproduce, download, store, post, broadcast, transmit, modify, sell or make available to the public content from our website(s) or publications, including our logos and name, without the prior written approval of the Marianist Province.